In the course of this exhibition, we had a positive conversation with exhibitors and customers from many countries and regions, especially the countries along the Belt and Road. As we all know, since the Belt and Road Initiative have been proposed, infrastructure connectivity has always been a priority area for Belt and Road construction, which also provides a lot of opportunities for many domestic machinery exports. In this exhibition, we have communicated with many clients from Myanmar. In recent years, with the rapid development of the local construction market, the demand for many construction equipment is also increasing. Therefore, the Myanmar customer put his eyes on the block-making machine, which is best to be a block machine with high output and convenient operation. Based on his description of relevant factors, we recommended our large equipment to him and reached cooperation. After that, some other Burmese customers also visited his factory.

Since this exhibition, we have reached cooperation with customers in 130 countries and regions, and continue to make efforts to open the international market. 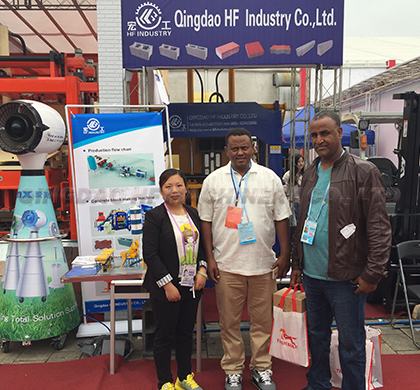 Qingdao HF Machinery Co., Ltd is the professional manufacturer and exporter for block machine since 1989, providing users in 130 countries and regions with efficient and intelligent block equipment and services.

In November 2019, the 30th PHIL CONSTRUCT opened in Manila, the capital of the Philippines.The PHIL CONSTRUCT is one of the largest and most influential professional exhibitions in the construction, building materials and construction machinery industry i

The PHIL CONSTRUCT 2018 is the largest construction machinery, mining machinery and construction industry exhibition in the Philippines, and our company was also invited to attend.

Whether for inquiries for inspections and
maintenance, for individual plant optimizations or
extensions, or spare and wear parts.

Our after-sales service is at your disposal for all
questions

Show on the Map

GET YOUR FREE QUOTE